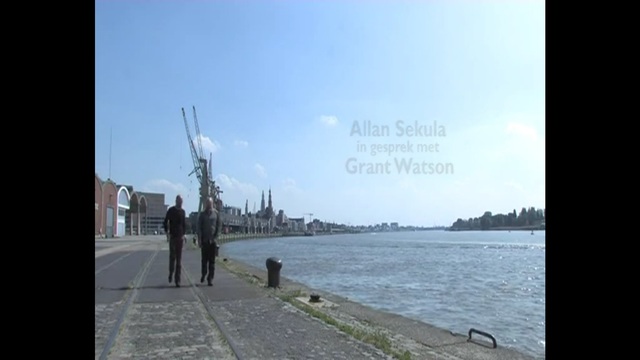 GW: Allan, since the mid too late ‘80s you have been making work about the maritime industry. The first project was Fish Story, but there have been many other interrelated projects, including most recently Shipwreck and workers, which was shown in Documenta 12. I don’t know if you want to talk a little about how you started to get involved in this subject matter?

AS: In the middle of the 1980s I became interested in the maritime world. I had grown up in a port city, in the harbor area of Los Angeles. It was the world I knew as a kid. I worked in restaurants on the waterfront and went to school with the sons and daughters of fishermen,  longshoremen and shipyard workers. So, I had a kind of sense of that world, but it never occurred to me that that could be a subject matter as an artist until I was already in my thirties. I also think it was after I had been in Ohio for four years and I was missing the sea coast. That may well have contributed to my feeling that when I came back to Los Angeles in the middle of the 1980s, I started a project that was about the connections between port cities.

Partly I was interested in the fact that you can’t really resolve port cities in a binary model because any port can be potentially connected to any other, so you basically have a more network relation. Also, I was interested in the materiality of goods flows, that ninety percent of the world’s cargo moves by sea, countered the myths of the internet, not everything is travelling at the speed of light. Obviously, without energy derived from hydrocarbon sources - which tends to be the weightiest, something like fifty percent by weight of the cargo that is actually moved, whether it would be coal or natural gas or oil -  none of this would work, none of this industrial system would work. So, I started working very slowly on the project of looking at ports at ease and it occurred to me at a certain point that I needed to actually deal with this space between, so to speak, the mid-ocean itself, the passage of ships.