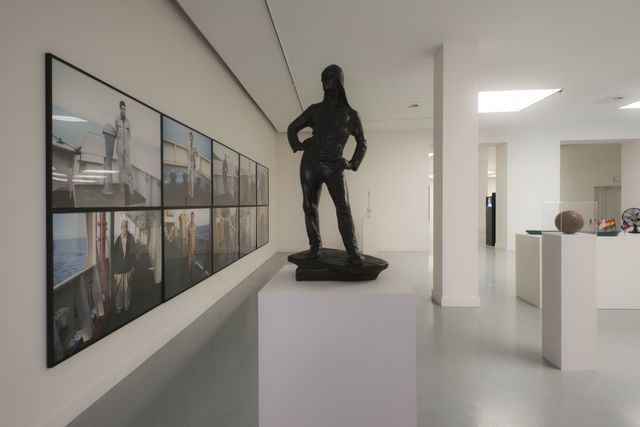 Ship of Fools continues Allan Sekula's investigation into the sea as a forgotten space that binds together shifting sites of production with markets and consumers around the world. It features the voyage of the Global Mariner, a ship that circumnavigated the globe between 1998 and 2000, carrying an exhibition detailing the conditions of workers in the shipping industry. Sekula documented this journey with portraits of seafarers, dock workers and port cities, which register the affects of globalisation on people’s lives. With these works, the artist counters the myth that underpins neoliberal ideology of painless flows of goods and capital that constitute international trade.

The Global Mariner was also embarked on what can only be seen as an ironic counter-enactment of an older project dating back to the very origins of modem imperial dominion, namely the first circumnavigation of the globe by Magellan. This was Magellan in reverse. Indeed, the ritual significance of circumnavigation should not be under emphasized. These epochal voyages were first re-enacted in the epoch of high imperialism, serving as theatrical assertions of a naval power’s emergence on the world stage, as was the case with the circumnavigation of Admiral Dewey’s “White Fleet” after the decisive American victory over Spain in Manila Bay in 1898. In the American case, the grand, global naval parade, showing the flag, in naval parlance, put the muscle behind the geostrategic ambition expressed by the naval theorist Alfred Thayer Mahan. In the later 20th century, the solo circumnavigator ritually revitalizes the individualist underpinnings of the capitalist spirit of adventure, while simultaneously obscuring through the drama of solitary endeavor and extreme self-sufficiency – the industrial and social dimension of the world-spanning project. The fascination with such voyages, manifested in the tragically ill-fated work of Bas Jan Ader, or more recently in a number of intriguing projects by Tacita Dean, is entirely consistent with a return to a seemingly exhausted romanticism, and an effort to divorce adventure from its historical linkage with plunder and conquest. That romanticism should only seek its survival in oceanic immersion, hyper solitude, and the extreme extra territoriality of the middle passage is a sign of the desperation encountered in its rescue from generalized cultural debasement. Today this postmodern, quasi romantic “return” to the sea must be understood as fundamentally different from its Byronic precedent, since it contends with a sea that is both depleted of resources and sublimely threatening in a new way with the advent of global warming, a sea that kills and is being killed, a sea that is also subject -in the developed world -to a ubiquitous variety of hyper-real representations, from aquatic theme parks to the species rich aquariums that have become a fixture of every urban waterfront leisure complex. The Global Mariner insisted, on the contrary, in its plodding ordinary way on the return to social questions. Speaking with the caution of a Cold War liberal, Steichen had claimed that The Family of Man was about “human consciousness, not social consciousness.” The great strength of the Global Mariner experiment was to raise the question of society from the very space that is imagined to be beyond society. Nothing special: a ship like many others, so ordinary that one Seattle resident, seeing the ship being ceremoniously welcomed by the fireboats of that strong union city, wondered what the fuss was all about. In other words, here was the sort of welcome one would expect for an aircraft carrier or the QE2, but not for an old ‘tween decker, presumably carrying coffee or pulp paper, or some other anonymous bulk commodity. It is all the more profound that this ship should seek to represent the workings of empire at a time when the global economy is assumed to be entirely virtual in its connectedness, magically independent of the slow maritime movement of heavy things. The arrogant conceit of the cyber economy, for that matter of the very idea of the post industrial era, is that we disavow our dim but nagging awareness that nearly all energy -whether converted to electricity or derived from direct combustion -comes from oil or other hydrocarbon fossil fuels, or on fissionable uranium refined from yellow cake ore: solids, liquids and gases that are extracted from the earth and transported in bulk. The very slowness of the Global Mariner’s voyage, the twenty months of its circumnavigation, reminds us of the duration of early modern seafaring under sail, and also of the contemporary persistence of slow, heavy transport flows. […]

This text is a revised extract from Allan Sekula, TITANIC’s wake (Cherbourg: Le Point du Jour Éditeur, 2003). First published as part of “Between the Net and the Deep Blue Sea: Rethinking the Traffic in Photographs”, October 102 (Fall 2002), pp. 3-34.