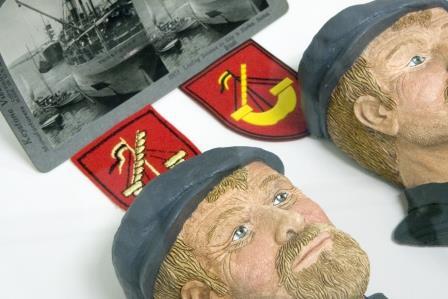 The Dockers’ Museum started in the vein of the tradition of artist’s museums. It can be seen both as an anti-museum and as an anti-archive. It refuses as much a hierarchy of images as the need to document all and everything. It replaces those by minute attention to the understanding that can be derived from ‘minor’ objects and images, brought together in small groups that enhance a potential of meaning in each of them. Sekula called these groups ‘sections’ and he gradually developed their scope. The Dockers’ Museum thus became a Herculean work in all its humility; an image of our world from the perspective of the dock laborer, the one who is always standing on the threshold between land and sea.

The Dockers’ Museum was explicitly intended not to be conclusive. Every exhibition would include only some of the sections and any display was to be an entirely new iteration of The Dockers’ Museum, in which he engaged with the local context and iconography, as Sekula proved from the first venues on. In the last three years of his life The Dockers’ Museum became no less than an obsession for the artist. Sekula acquired an immense number of objects for uncompleted sections of his final undertaking, which he intended to be presented on later occasions. It allowed him a vast register for launching a profound reflection on the functioning of our human world, close to the vernacular reality of everyday practical life that was so dear to him. The Dockers’ Museum is utterly material in its embedding, and therewith fully real. It is a space in which a football signed by Pelé— hero of the Santos longshoremen—can stand on a par with the famous sculpture of a dock-worker by the Belgian artist Constantin Meunier, in which a Japanese foghorn acquired from an Indian source can be  a crucial witness on the same level as a group of postcards might be.