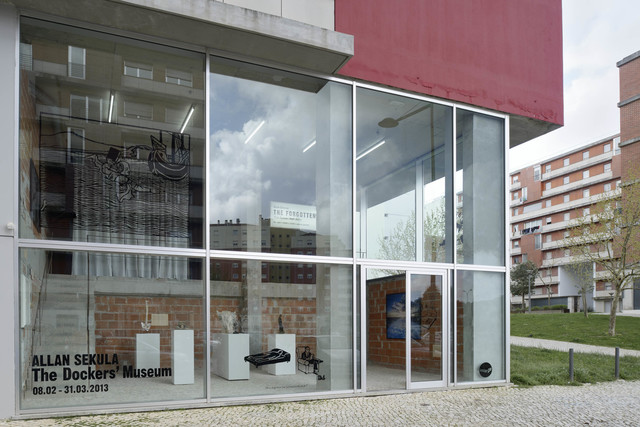 Allan Sekula is a renowned photographer, theorist, photography historian and writer. Using colour photographs in conjunction with text, Allan Sekula’s work focuses on economic systems, a subject often considered incompatible with the field of art. Cultural critics frequently see the economy to be a problematic issue that is of little interest for arts practitioners, although many artworks are under the unmistakable influence of market forces.

For Sekula, it is irrelevant that photography has finally been acknowledged as an artistic medium like any other, alongside painting or sculpture. He considers the modesty of the medium, and the possibility it offers to attain knowledge through keen observation, to be a more interesting characteristic. Relying on its ability to describe aspects of economic systems within the framework of the visual arts, through what is commonly called ‘documentary’ practice, Sekula attempts to offer a clear alternative to the kind of photography usually shown by the contemporary system of museum and galleries. According to the artist this system in essence prepares the work for an ‘antiquarian future’, which condemns art to conform with the museum’s relics of the past.

In recent years, Sekula has worked on long documentary projects inspired by contemporary political events. These projects have given rise to sequences and major series that often culminate in the publication of a book. In these publications, the photographs are contextualised by the artist’s texts - which are always present in his exhibitions - which emphasizes the fact that Sekula’s practice also encompasses writing, alongside the production of visual work. Sekula calibrates each exhibition through a careful selection of photographs and objects specific to the context of the given place, thus ‘re-writing’ his own narrative via the re-arrangement of work. By developing his exhibitions from venue to venue, they in effect connect cities and harbours, which evokes the production and flow of goods via complex network relationships of harbour cities, the subject of Sekula’s practice.

Lumiar Cité in Lisbon now presents the exhibition The Dockers’ Museum. Photographs from the series ‘Ship of Fools’ and the film ‘The Forgotten Space’ (Allan Sekula, Noël Burch) constitute part of the exhibition. The configuration of the exhibition is defined through an emphasis on cartoons and objects related to the world of dockers and seafarers, reflected in the exhibition title. The ‘objects of interest’ collected by the artist and the cartoons appropriated by him are not to be understood as artworks, but instead contextualize Sekula’s photography and film, while these in turn contextualize Sekula’s ongoing activity of collecting these items. Sekula finds his ‘objects of interest’ at online auction houses, contrasting the mystical ‘speed of light’ of the Internet with the slow movement of cargo, 90 per cent of which is moved by sea.

Through taking the ‘forgotten space’ of the sea with its 100,000 ships and 1,500,000 workers as the subject for his work, Allan Sekula reflects on the effects of current neoliberal ideologies. His work questions their promises of a painless, endless flow of goods and capital with the emphasis on consumption and negating the work and working conditions behind it. It reveals the far-reaching impact of globalization on people’s lives.

Allan Sekula (USA) lives and works at Los Angeles as an activist, artist, writer and critic. His work comprises, since the beginning of the 1970’s, the history and theory of photography, as well several projects focused on economical and geopolitical thematic. His books include: ‘Photography against the Grain: Essays and Photo Works 1973-1983’, ‘Fish Story’, ‘Geography Lesson: Canadian Notes’, ‘Dismal Science: Photo Works 1972-1996’, ‘Allan Sekula: Dead Letter Office’, ‘Deep Six/Passer au bleu’ and ‘TITANIC's wake’ (Portuguese version published by Maumaus). He is also co-author of ‘Five Days That Shook the World: Seattle and Beyond’. Sekula has participated in numerous individual and collective exhibitions, including the 50th Venice Biennial, Documenta X, XI and XII in Kassel, and the 29th São Paulo Biennial. He is a professor at the California Institute of the Arts (Cal Arts), in Valencia (USA).

The exhibition The Dockers’ Museum is curated by Jürgen Bock and is being presented under the partnership between the Lumiar Cité exhibition space and the La Criée centre d’art contemporain (Rennes, France) in collaboration with M HKA (Antwerp, Belgium) and Stills - Scotland's Centre for Photography (Edinburgh, UK).