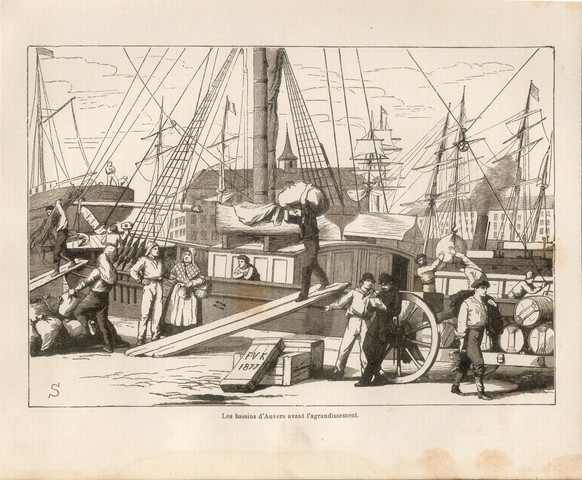 According to the French inscription, the sepia print displays ‘The Basins of Antwerp before the Expansion’ (Les basins d'Anvers avant l'agrandissement). In other words, it documents the contemporary docks with their port and ship labor, the likes of which will no longer exists shortly after the ‘expansion’. The building in the background is the former Hanseatic House or Hanzehuis.

With this in mind, the engraving depicts the surrounding Bonaparte and Willem Docks. In 1878, both docks were equiped with hydraulic cranes. The survival of manual labour was no longer certain, so the main motive is to depict the manual dock labor’s different tasks and typical anecdotes. According to Sekula, this choice of subject is typical for the time during which the first workers’ movements arose. At the dock, there are about five sailing ships and one stevedore. In the foreground, six longshoremen are engaged in their duties. They lift the load manually on their backs or with pulleys. From the deck, one crew member stares dreamily at the city.

Bottom left, at the quay, another dockworker is already in conversation with a saleswoman. At the right, a man has changed clothes and is walking away from the ship. On the other side of the ramp, a member of the group is in discussion with a customs officer who records the goods brought ashore, in order to raise import taxes on them later. The dockworker points at three wooden crates. On the front crate, the letters ‘FVK’ are engraved, as well as ‘1877’. These are probably the initials of the author and the year of creation, but it also refers to the way in which the cargo was registered: at the top of the crate, the abbreviation of the company where the goods were produced was written, at the bottom, the crate was numbered. Furthermore, bottom left of the image, there’s a big S.